I met with Naaz Sheikh and Maddie Stump, two wonderful students from Jump! 2015, to check in, catch up, and reflect on the days when it wasn't -10 degrees and we were hanging out on mountains and cavorting around the warm and empty UMass campus over the summer. I met these two while working as the Student Activities Coordinator for Jump!, which is a four-week transitional program for incoming UMass students that gives them a head start on everything from credits to campus life. 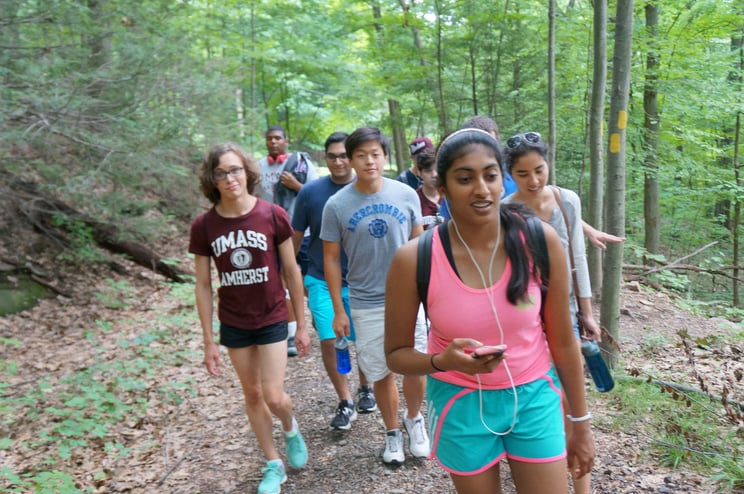 I asked each of them about their experiences with Jump!, and how it affected their transition into college. "For me, it was about being comfortable on campus," Naaz told me. "I come from a high school of 1200 students, and I was worried about getting lost in the numbers at UMass. But Jump! showed me that you can find a community that you can learn with and grow from, and this helped me find the balance between doing work and having fun. Jump! helped me get used to creating that balance without too much pressure, and it felt very natural by the time I got to school in the fall."

Maddie said, "Thanks to Jump!, I first got involved with the Stonewall Center. I knew about a lot of on-campus resources, too, like the LRC (Learning Resource Center) in the library. And because of the Faculty Chat with Professor [Alexandrina] Deschamps, I found about the Women, Gender, and Sexuality Studies Major, and am now pursuing a double major in WGSS and Public Health."

Maddie, a budding student activist, told me that the most memorable event of Jump! for her was the Student Activism Panel, where undergraduate and graduate student activists working on a variety of campaigns discussed their journey with embracing the social change work happening on campus. "I learned about different organizations on campus, like Gender Liberation UMass (GLU) which I am involved with now and would not have known about otherwise."

Naaz reflected on the "closeness of the group," saying that it was "very nice to have a community of people who could share resources with you later on in the school year, to go to lunch between classes with." As far as a favorite event, though, Naaz said it was definitely our hike to the top of Mt. Holyoke. "My family aren't big nature people," he confessed. "It was one of my first excursions doing something like that, and definitely not something I would have done on my own."

Maddie had just returned from the Creating Change Conference in Chicago when we met, so she was still in the process of settling into her second semester when I asked her how it felt different from the first. "I've learned from my mistakes in first semester. I've learned that time management is so important, as is not taking on too much and spreading yourself thin," she told me. "But I've only been in Amherst for about 12 hours so..." 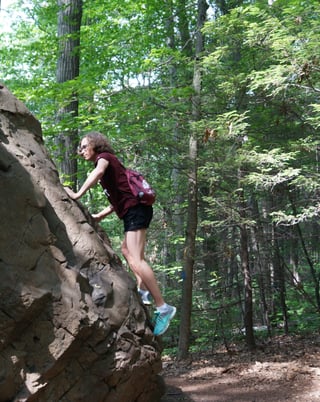 Naaz spoke of his lasting relationships with other students from his Jump! cohort. "I still talk to Jason [Zhuo] and Lexa [Cupo]," he told me. "We talk to each other if we are unsure about classes or something."

When I asked them about how their summer coursework prepared them for their classes in the fall, both Maddie and Naaz raved about Professor Kathleen Brown-Perez, and how ready they felt coming in. Prof. Brown-Perez was their professor for "Ideas That Change the World," one of the two Honors courses included in the Jump! program. "I felt really close to Professor Brown-Perez," Naaz told me. "We even kept in touch when I got to campus in the fall. In her course, I really learned how to power through readings. I felt like the amount of work I did per day in Jump! is very similar to what I have now. The intensity of Jump! certainly eased us into [a full course load]."

Maddie agreed:  "The workload definitely prepared me for my other classes. In WGSS 201: Gender and Difference, the introductory course for my major, for example, I had 20-40 pages of reading a night. In Jump!, we had several late nights of reading. We were prepared for an easy or a hard course, but the workload of Professor Brown-Perez's class definitely made my easier classes feel much easier."

Both Maddie and Naaz enthusiastically said they would recommend Jump! to friends, as they both "felt overall prepared" entering the school year. 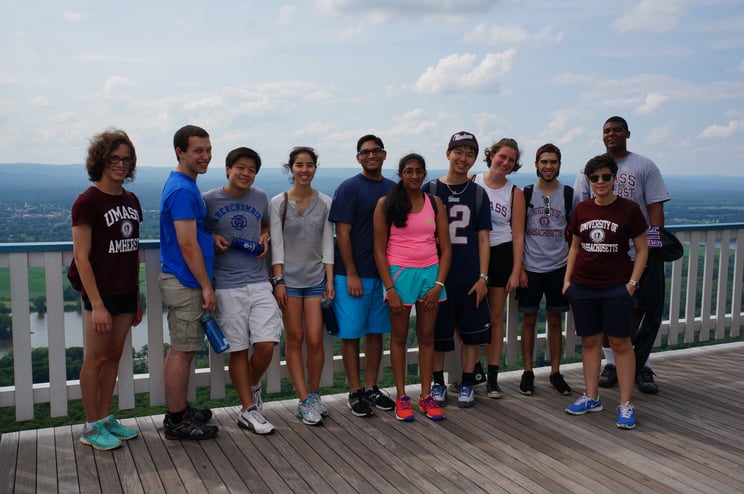 Jump! was lucky enough to have these two amazing students as a part of our first cohort and model what a successful transition into University life looks like. Is this an experience that you want to embark on? Consider joining our second Jump! cohort in 2016 and experience the difference that four weeks on campus will make before starting your real journey in the fall!

For more information or to register for Jump! 2016, head to our website!

If you are high school student looking to join us on campus this summer, check out our expansive pre-college offerings at www.umass.edu/summer/precollege!